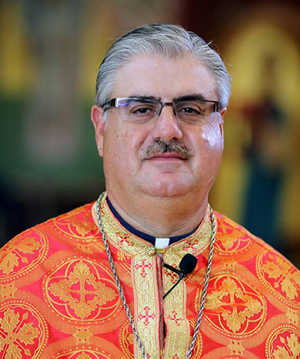 Over the past 35 years, Fr. Dean has been instrumental in beginning Orthodox Christian Fellowship programs-- while a Proistamenos at St. John the Baptist in Cedar Rapids, Iowa, he began the OCF Program at the University of Iowa. He also began a Soup Kitchen in the church hall in Cedar Rapids before moving it to a public building in Downtown Cedar Rapids. Additionally, he ministered to the students and faculty after the tragedy at Virginia Tech University. Fr. Dean has created the Orthodox Christian Fellowship at Florida Gulf Coast University.  He strives to meet the needs of both the young and older members of the parish.

Fr. Dean also served the Parishes of Wilmington, DE before coming to Florida. Holy Trinity, Roanoke, VA.  He was made a Protopresbyter in 2006. 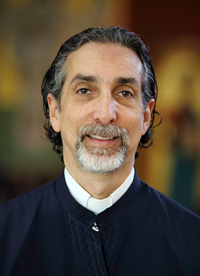 Deacon John was born to Victor and Elaine Howard in Charleston, WV, on August 1st, 1960; the youngest boy in a family of six children. He was raised into a struggling middle class family where he was taught that God, the Orthodox Church, and family were of primary importance. This atmosphere of love, kindness, concern for others, and hard work put him on a career path toward medicine. He is board certified in Diagnostic Radiology and has a sub-specialty board certification in Vascular and Interventional Radiology. He met his wife, Lanette, in 1975 and they married on February 20th, 1988.They have three beautiful adult daughters, Brooke, Amanda, and Tara.

Deacon John was born and baptized into an Orthodox Christian family. He has regularly attended church and has been an active member since his youth. He served on the Annunciation Parish Council for 16 years; five as president of the council. He considers the purchase of the 5-acre parcel to the east of the church as a highlight of his tenure as president. He served in the altar as an adult supervisor for many years and completed the St. Stephens Course of Studies in Orthodox Theology.